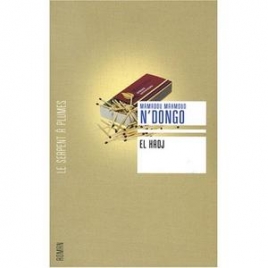 I left my table at the Dobin. I returned to the hotel, and at one o'clock I was on the platform at Bayonne station.

It was only once I stamped my ticket that I noticed I was at least half an hour early. I sat on a bench and waited, glancing at a timetable I had found underneath. After some time I became bored and my attention shifted to the clock, then towards the entire station... my desire to be there lessened the more I looked around. I've never been fond of stations, especially the trains, which remind me of La Muette Estate in Drancy where I grew up.

When we moved there in '75, we knew nothing about Drancy. We lived there because it was Kouyaté’s decision to do so.

But I learnt very quickly that it wasn't an estate I was living in, but a mausoleum.

Living in La Muette meant existing in a time that was not your own, a time beyond your control; the proximity and intense contact with history was immense.

We were constantly confronted with the past. It took no more than a short walk to and from the shops across the road to buy bread to repeatedly see the monument, the carriage, the courtyard, and those buildings... the concentration camp.

I remember an elderly man visiting the camp sat on a bench, mourning whilst watching us play football.

I remember my feeling of discomfort, if not that of shame.

We felt that we didn't live in that estate, or that we weren't even meant to. The sentiment lingered no matter how much we covered the walls with wallpaper, installed furniture or filled the cupboards with our belongings. As a child, a disapproving look from certain people was enough to make me retreat back into my hall. Living within a place of death gave the impression that the museum, the carriage, the monument or even the camp itself could never be a place of memory.

I hardly went out on Memorial days; instead spending them sat in front of the television... until one day, every day became commemorative... I must have been eleven. The days passed like my nights, my mind consumed with the thought of the concentration camps. On the night our flat caught on fire, the screams merged with those of my nightmare. I wouldn't be alive if it weren't for a neighbour who rushed into my room to get me out of the flames.

After the funeral of my little sister and my parents in Pikine, Senegal, Moussa Kouyaté decided that my place was by his side, even if I had other uncles and aunts willing to take me in. He had me come back to France. I returned to Drancy once again, this time to the home of one of his mistresses in Gaston Roulaud. I was twelve years old.

In Gaston Roulaud, or Salengro as we liked to call it, the streets and school in particular hardly made things any better. I no longer saw barbed wires or watchtowers. No longer did I lay my eyes on the famished or the torture victims walking around in the estate. I certainly wasn't living in a camp anymore. Having moved however gave me no desired reassurance, but quite the opposite. I started to hear trains passing Bourget station at night, which in my mind closely resembled the convoys of the deported.

Posted by .(JavaScript must be enabled to view this email address) on 30 Oct 2013 around 6pm